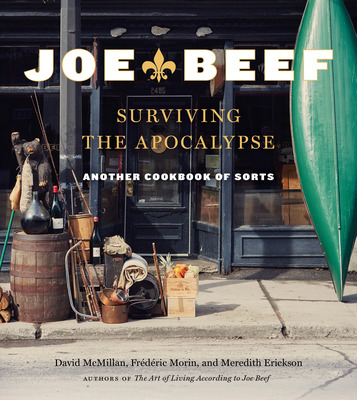 It's the end of the world as we know it. Or not. Either way, you want Joe Beef: Surviving the Apocalypse in your bunker and/or kitchen.

In their much-loved first cookbook, Frederic Morin, David MacMillan, and Meredith Erickson introduced readers to the art of living the Joe Beef way. Now they're back with another deeply personal, refreshingly unpretentious collection of 150 new recipes, some taken directly from the menus of Fred and Dave's acclaimed Montreal restaurants, others from summers spent on Laurentian lakes and Sunday dinners at home. Think Watercress soup with Trout Quenelles, Artichokes Bravas, and Deer Beer Belly--alongside Smoked Meat Croquettes, a Tater Tot Galette, and Squash Sticky Buns.
Also included are instructions for making your own soap and cough drops and guidance on stocking a cellar with apocalyptic essentials--Canned Bread, Pickled Pork Butt, and Smoked Apple Cider Vinegar--for throwing the most sought-after in-bunker dinner party.
In this book filled with recipes, reflections, and ramblings, you'll find chapters devoted to the Quebecois tradition of celebrating Christmas in July, the magic of puvlic television, and Fred and Dave's unique take on barbecue (Brunt-Enf Bourguignon, Cassoulet Rapide), as well as ruminations on natural wine and gluten-free cooking, and advice on why French cuisine rocks at a dinner party.
Whether you're holing up for a zombie holocaust or just cooking at home, Joe Beef is a book about doing it yourself, about making it your own, and about living--or at least surviving--in style.