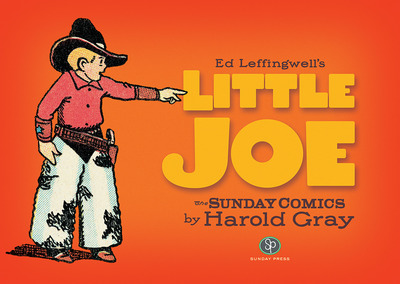 Read the best of Little Joe, from the creator of Little Orphan Annie, who took over this Western comic strip!

With the untimely death of his cousin and fellow cartoonist, Ed Leffingwell, Harold Gray took the reins of this seminal Western comic strip. He created a combination of dark adventure, as seen in his Little Orphan Annie, and a modern-West version of "family life" comics like Gasoline Alley.

This book presents the best of the Little Joe comic strip from 1937 to 1942, with violence, humor and warmth in a low-key style that could only be told in art and story by a master, Harold Gray.

Sunday Press Books is a specialty publishing house best known for its restoration of classic American comic strips, reprinted as gorgeous hardcover editions in the original size and colors. The brainchild of Peter Maresca, Sunday Press has rekindled our collective fascination with such beloved features as Little Nemo in Slumberland, Krazy Kat, Thimble Theatre, and more. These collections have received dozens of salutations and awards, including a stream of seventeen Will Eisner Comic Industry Award nominations for thirteen years running.