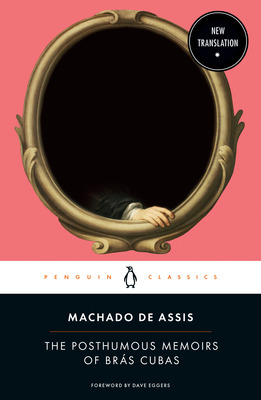 The Posthumous Memoirs of Brás Cubas

"One of the wittiest, most playful, and . . . most alive and ageless books ever written." --Dave Eggers, The New Yorker

A revelatory new translation of the playful, incomparable masterpiece of one of the greatest Black authors in the Americas

The mixed-race grandson of ex-slaves, Machado de Assis is not only Brazil's most celebrated writer but also a writer of world stature, who has been championed by the likes of Philip Roth, Susan Sontag, Allen Ginsberg, John Updike, and Salman Rushdie. In his masterpiece, the 1881 novel The Posthumous Memoirs of Brás Cubas (translated also as Epitaph of a Small Winner), the ghost of a decadent and disagreeable aristocrat decides to write his memoir. He dedicates it to the worms gnawing at his corpse and tells of his failed romances and halfhearted political ambitions, serves up harebrained philosophies, and complains with gusto from the depths of his grave. Wildly imaginative, wickedly witty, and ahead of its time, the novel has been compared to the work of everyone from Cervantes to Sterne to Joyce to Nabokov to Borges to Calvino, and has influenced generations of writers around the world.

This new English translation is the first to include extensive notes providing crucial historical and cultural context. Unlike other editions, it also preserves Machado's original chapter breaks--each of the novel's 160 short chapters begins on a new page--and includes excerpts from previous versions of the novel never before published in English.