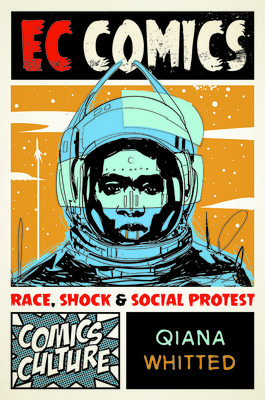 Entertaining Comics Group (EC Comics) is perhaps best-known today for lurid horror comics like Tales from the Crypt and for a publication that long outlived the company’s other titles, Mad magazine. But during its heyday in the early 1950s, EC was also an early innovator in another genre of comics: the so-called “preachies,” socially conscious stories that boldly challenged the conservatism and conformity of Eisenhower-era America.

EC Comics examines a selection of these works—sensationally-titled comics such as “Hate!,” “The Guilty!,” and “Judgment Day!”—and explores how they grappled with the civil rights struggle, antisemitism, and other forms of prejudice in America. Putting these socially aware stories into conversation with EC’s better-known horror stories, Qiana Whitted discovers surprising similarities between their narrative, aesthetic, and marketing strategies. She also recounts the controversy that these stories inspired and the central role they played in congressional hearings about offensive content in comics.

The first serious critical study of EC’s social issues comics, this book will give readers a greater appreciation of their legacy. They not only served to inspire future comics creators, but also introduced a generation of young readers to provocative ideas and progressive ideals that pointed the way to a better America.