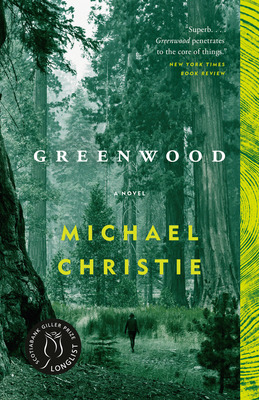 From the award-winning author of If I Fall, If I Die comes a propulsive, multigenerational family story, in which the unexpected legacies of a remote island off the coast of British Columbia will link the fates of five people over a hundred years. Cloud Atlas meets The Overstory in this ingenious nested-ring epic set against the devastation of the natural world.

They come for the trees. It's 2038 and Jacinda (Jake) Greenwood is a storyteller and a liar, an overqualified tour guide babysitting ultra-rich-eco-tourists in one of the world's last remaining forests. It's 2008 and Liam Greenwood is a carpenter, sprawled on his back after a workplace fall and facing the possibility of his own death. It's 1974 and Willow Greenwood is just out of jail for one of her environmental protests: attempts at atonement for the sins of her father's once vast and rapacious timber empire. It's 1934 and Everett Greenwood is a Depression-era drifter who saves an abandoned infant, only to find himself tangled up in the web of a crime, secrets, and betrayal that will cling to his family for decades. And throughout, there are trees: a steady, silent pulse thrumming beneath Christie's effortless sentences, working as a guiding metaphor for withering, weathering, and survival.

Transporting, beautifully written, and brilliantly structured like the nested growth rings of a tree, Greenwood reveals the knot of lies, omissions, and half-truths that exists at the root of every family's origin story. It is a magnificent novel of greed, sacrifice, love, and the ties that bind--and the hopeful, impossible task of growing toward the light.