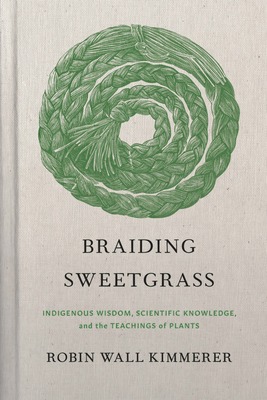 Updated with a new introduction from Robin Wall Kimmerer, the special edition ofBraiding Sweetgrass, reissued in honor of the fortieth anniversary of Milkweed Editions, celebrates the book as an object of meaning that will last the ages. Beautifully bound with a new cover featuring an engraving by Tony Drehfal, this edition includes a bookmark ribbon, a deckled edge, and five brilliantly colored illustrations by artist Nate Christopherson. In increasingly dark times, we honor the experience that more than 350,000 readers in North America have cherished about the book—gentle, simple, tactile, beautiful, even sacred—and offer an edition that will inspire readers to gift it again and again, spreading the word about scientific knowledge, indigenous wisdom, and the teachings of plants.

As a botanist, Robin Wall Kimmerer has been trained to ask questions of nature with the tools of science. As a member of the Citizen Potawatomi Nation, she embraces the notion that plants and animals are our oldest teachers. InBraiding Sweetgrass, Kimmerer brings these two lenses of knowledge together to take us on “a journey that is every bit as mythic as it is scientific, as sacred as it is historical, as clever as it is wise” (Elizabeth Gilbert).

Drawing on her life as an indigenous scientist, and as a woman, Kimmerer shows how other living beings—asters and goldenrod, strawberries and squash, salamanders, algae, and sweetgrass—offer us gifts and lessons, even if we've forgotten how to hear their voices. In reflections that range from the creation of Turtle Island to the forces that threaten its flourishing today, she circles toward a central argument: that the awakening of ecological consciousness requires the acknowledgmentand celebration of our reciprocal relationship with the rest of the living world. For only when we can hear the languages of other beings will we be capable of understanding the generosity of the earth, and learn to give our own gifts in return.