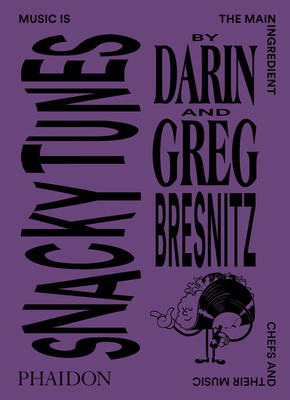 Founded in 2009 by Darin and Greg Bresnitz, the podcast Snacky Tunes served as the first platform to discuss food and music, creating a space for chefs, restaurateurs, musicians, and bands to share their stories and creative processes.

The Bresnitz brothers now present Snacky Tunes — a collection of 77 all-new candid interviews from the world's most acclaimed chefs — showcasing these soul-sustaining exchanges, in which food and music seamlessly intertwine.

The chefs share personal stories about how music plays a pivotal role in their careers-shaping identities, igniting creativity, and influencing the restaurants they build and the food they serve. Organized alphabetically, individual entries are also accompanied by a previously unpublished recipe and custom playlist crafted by each chef, showcasing how a soundtrack both sets the tone for their kitchens, restaurants and fuels their creative process.

Snacky Tunes features the innovative culinary minds of chefs like Selassie Atadika who owns Midunu in Ghana; Brazilian chef Alex Atala who owns D.O.M. in Sao Paulo; May Chow, who was touted as China's "Best Female Chef" in 2017; Pooja Dhingra, who founded the Mumbai patisserie chain Le15; Michael Fojtasek who runs James Beard-nominated Olamaie in Austin, Texas; Uruguayan-born Ignacio Mattos who cooks food that reflects his culinary education and experiences in New York City; Asma Khan, the chef-owner of the renowned Darjeeling Express restaurant in London; and Shohei Yasuda from Japan, who has Kabi in Tokyo.

A unique flexibound book with playful graphic design and typography throughout.