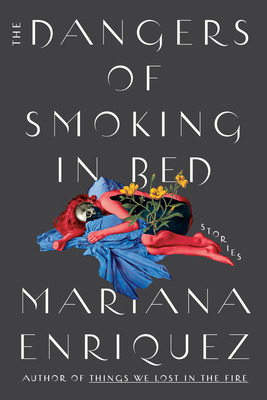 The Dangers of Smoking in Bed

“The lauded Argentine author of What We Lost in the Fire returns with enthralling stories conjured from literary sorcery” (O: The Oprah Magazine), in the tradition of Shirley Jackson and Jorge Luis Borges.

Mariana Enriquez has been critically lauded for her unconventional and sociopolitical stories of the macabre. Populated by unruly teenagers, crooked witches, homeless ghosts, and hungry women, they walk the uneasy line between urban realism and horror. The stories in her new collection are as terrifying as they are socially conscious, and press into being the unspoken—fetish, illness, the female body, the darkness of human history—with bracing urgency. A woman is sexually obsessed with the human heart; a lost, rotting baby crawls out of a backyard and into a bedroom; a pair of teenage girls can’t let go of their idol; an entire neighborhood is cursed to death when it fails to respond correctly to a moral dilemma.

Written against the backdrop of contemporary Argentina, and with a resounding tenderness toward those in pain, in fear, and in limbo, The Dangers of Smoking in Bed is Mariana Enriquez at her most sophisticated, and most chilling.