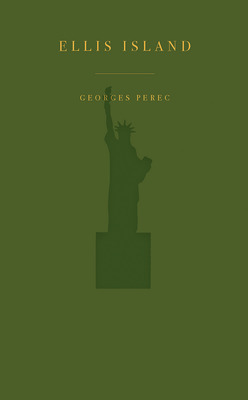 Georges Perec, employing lyrical prose meditations, lists, and inventories, conjures up the sixteen million people who, between 1890 to 1954, arrived as foreigners and stayed on to become Americans.Â Perec (who by the age of nine was an orphan: his father was killed by a German bullet, and his mother perished in Auschwitz) is wide-awake to the elements of chance in immigration and survival: “To me Ellis Island is the ultimate place of exile. That is, the place where place is absent, the non-place, the nowhere. Ellis Island belongs to all those whom intolerance and poverty have driven and still drive from the land where they grew up.”Ellis Island is a slender Perec masterwork, unique among his many singular works.

The acclaimed poet and scholar MÃ³nica de la Torre contributes an afterword that keeps Perec's writing front and center while situatingEllis Island in the context of America’s current fierce battles over immigration.