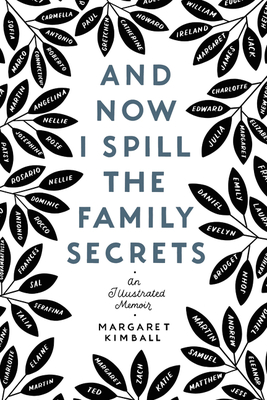 And Now I Spill the Family Secrets

In the spirit of Alison Bechdel’s Fun Home and Roz Chast’s Can’t We Talk About Something More Pleasant?, Margaret Kimball’s AND NOW I SPILL THE FAMILY SECRETS begins in the aftermath of a tragedy.

In 1988, when Kimball is only four years old, her mother attempts suicide on Mother’s Day—and this becomes one of many things Kimball’s family never speaks about. As she searches for answers nearly thirty years later, Kimball embarks on a thrilling visual journey into the secrets her family has kept for decades.

Using old diary entries, hospital records, home videos, and other archives, Margaret pieces together a narrative map of her childhood—her mother’s bipolar disorder, her grandmother’s institutionalization, and her brother’s increasing struggles—in an attempt to understand what no one likes to talk about: the fractures in her family.

Both a coming-of-age story about family dysfunction and a reflection on mental health, AND NOW I SPILL THE FAMILY SECRETS is funny, poignant, and deeply inspiring in its portrayal of what drives a family apart and what keeps them together.