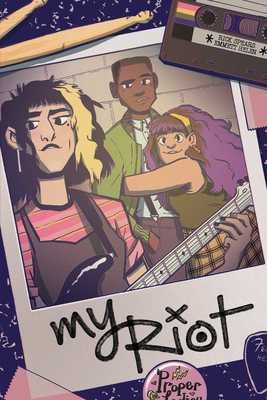 "Full of raw noise & 90's angst, MY RIOT delivers an electric gut-punch of a tale that will have you aching for the return of the riot grrrl movement." — Kim Liggett, New York Times Bestselling author of THE GRACE YEAR

Set in the early '90s, My Riot is about a trio of teen girls team up to form a rock band and shake off society's expectations of what it means to be a young woman coming of age in the modern world.

1991—Val, a teenager from a conservative family, has grown up dreaming of becoming a ballerina, but recently something has changed. She’s begun feeling pressure to conform to a specific idea of beauty, body type, and a personality that just doesn’t fit.

Val meets Kat, a smart, witty girl that doesn’t take any crap off anyone. Kat introduces Val to punk rock. Along with Rudie, another new friend, the three form an all-girl punk band they ironically name The Proper Ladies.

Soon Val and her friends find themselves caught up in a movement with other girls also starting bands—also finding their voice. Collectively, these “riot grrrls” discover that their songs ring out loud and powerful, and for Val, there’s no going back.