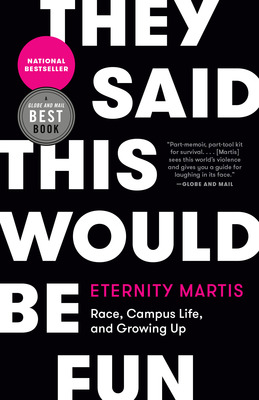 They Said This Would Be Fun

A powerful, moving memoir about what it's like to be a student of colour on a predominantly white campus.

A booksmart kid from Toronto, Eternity Martis was excited to move away to Western University for her undergraduate degree. But as one of the few Black students there, she soon discovered that the campus experiences she'd seen in movies were far more complex in reality. Over the next four years, Eternity learned more about what someone like her brought out in other people than she did about herself. She was confronted by white students in blackface at parties, dealt with being the only person of colour in class and was tokenized by her romantic partners. She heard racial slurs in bars, on the street, and during lectures. And she gathered labels she never asked for: Abuse survivor. Token. Bad feminist. But, by graduation, she found an unshakeable sense of self--and a support network of other women of colour.

Using her award-winning reporting skills, Eternity connects her own experience to the systemic issues plaguing students today. It's a memoir of pain, but also resilience.