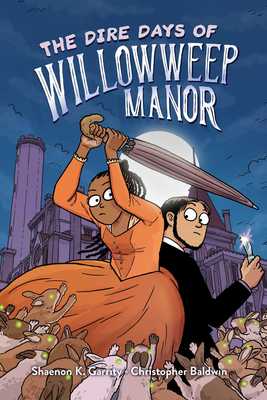 The Dire Days of Willowweep Manor

Nimona meets Paper Girls with a literary twist in this wickedly funny graphic novel about a teenager who is swept up in a strange new universe and must save it from an all-consuming evil in order to return home.

One dark and stormy night, Haley sees a stranger drowning in the river. Since her greatest passion is Gothic romance novels, she knows her moment has come. But when Haley leaps into the water to rescue the stranger, she awakens in Willowweep. It certainly looks like the setting of one of her favorite books: A stately manor. A sinister housekeeper. Three brooding brothers. There’s even a ghost.

Except Willowweep is not what it seems. Its romantic exterior hides the workings of a pocket universe—the only protection our world has against a great force of penultimate evil, and its defenses are crumbling. Could cruel fate make Haley the heroine that Willowweep needs?