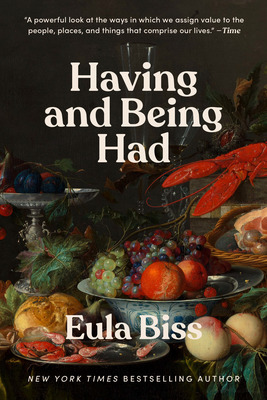 Having and Being Had

NAMED A BEST BOOK OF THE YEAR BY TIME , NPR, INSTYLE, AND GOOD HOUSEKEEPING

“A sensational new book [that] tries to figure out whether it’s possible to live an ethical life in a capitalist society. . . . The results are enthralling.” —Associated Press

A timely and arresting new look at affluence by the New York Times bestselling author, “one of the leading lights of the modern American essay.” —Financial Times

“My adult life can be divided into two distinct parts,” Eula Biss writes, “the time before I owned a washing machine and the time after.” Having just purchased her first home, the poet and essayist now embarks on a provocative exploration of the value system she has bought into. Through a series of engaging exchanges—in libraries and laundromats, over barstools and backyard fences—she examines our assumptions about class and property and the ways we internalize the demands of capitalism. Described by the New York Times as a writer who “advances from all sides, like a chess player,” Biss offers an uncommonly immersive and deeply revealing new portrait of work and luxury, of accumulation and consumption, of the value of time and how we spend it. Ranging from IKEA to Beyoncé to Pokemon, Biss asks, of both herself and her class, “In what have we invested?”