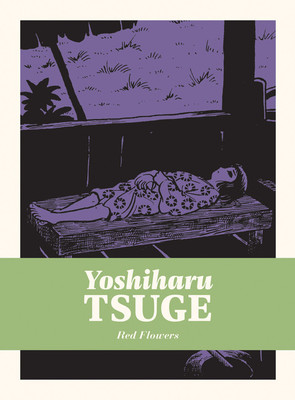 Yoshiharu Tsuge leaves early genre trappings behind, taking a light, humorous approach in these stories based on his own travels. Red Flowers ranges from deep character studies to personal reflections to ensemble comedies set in the hotels and bathhouses of rural Japan. There are irascible old men, drunken gangsters, reflective psychiatric-hospital escapees, and mysterious dogs. Tsuge’s stories are mischievous and tender even as they explore complex relationships and heartache. It’s a world of extreme poverty, tradition, secret fishing holes, and top-dollar koi farming.

The title story highlights the nuance and empathy that made Tsuge’s work stand out from that of his peers. A nameless traveler comes across a young girl running an inn. While showing the traveler where the best fishing hole is, a bratty schoolmate reveals the girl must run the business because her alcoholic father is incapable. At the story’s end, the traveler witnesses an unusual act of kindness from the boy as the girl suffers her first menstrual cramps — and a simple travelogue takes on unexpected depth.

Red Flowers affirms why Tsuge went on to become one of the most important cartoonists in Japan. These vital comics inspired a wealth of fictionalized memoir from his peers and a desire within the postwar generation to document and understand the diversity of their country’s culture.