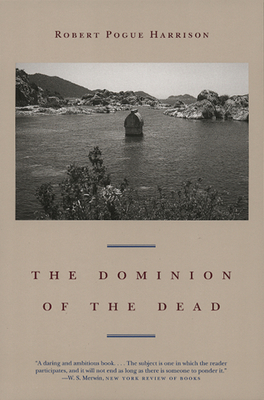 The Dominion of the Dead

How do the living maintain relations to the dead? Why do we bury people when they die? And what is at stake when we do? In The Dominion of the Dead, Robert Pogue Harrison considers the supreme importance of these questions to Western civilization, exploring the many places where the dead cohabit the world of the living—the graves, images, literature, architecture, and monuments that house the dead in their afterlife among us.This elegantly conceived work devotes particular attention to the practice of burial. Harrison contends that we bury our dead to humanize the lands where we build our present and imagine our future. As long as the dead are interred in graves and tombs, they never truly depart from this world, but remain, if only symbolically, among the living. Spanning a broad range of examples, from the graves of our first human ancestors to the empty tomb of the Gospels to the Vietnam Veterans Memorial, Harrison also considers the authority of predecessors in both modern and premodern societies. Through inspired readings of major writers and thinkers such as Vico, Virgil, Dante, Pater, Nietzsche, Heidegger, and Rilke, he argues that the buried dead form an essential foundation where future generations can retrieve their past, while burial grounds provide an important bedrock where past generations can preserve their legacy for the unborn.The Dominion of the Dead is a profound meditation on how the thought of death shapes the communion of the living. A work of enormous scope, intellect, and imagination, this book will speak to all who have suffered grief and loss.