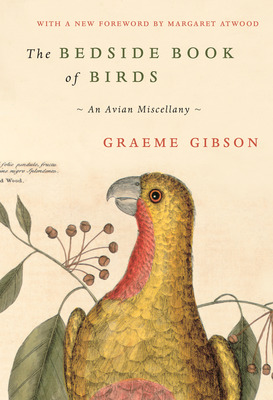 The Bedside Book of Birds

In this stunning assemblage of words and images, novelist and avid birdwatcher Graeme Gibson offers an extraordinary tribute to the venerable relationship between humans and birds.

From the Aztec plumed serpent to the Christian dove to Plato's vision of the human soul growing wings, religion and philosophy use birds to represent our aspirational selves. Winged creatures appear in mythology and folk tales, and in literature by writers as diverse as Ovid, Thoreau, and T. S. Eliot. They've been omens, allegories, and guides; they've been worshipped, eaten, and feared. Birds figure tellingly in the work of such nature writers as Gilbert White and Peter Matthiessen, and are synonymous with the science of Darwin. Gibson spent years collecting this gorgeously illustrated celebration of centuries of human response to the delights of the feathered tribes. The Bedside Book of Birds is for everyone who is intrigued by the artistic forms that humanity creates to represent its soul.