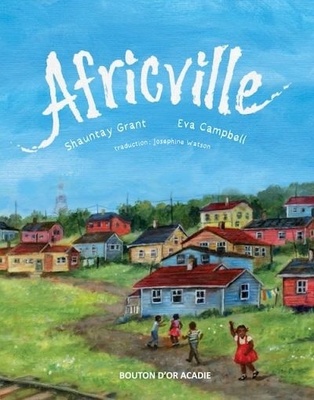 The French edition of the award-winning picture book.

When a young girl visits the site of Africville, in Halifax, Nova Scotia, the stories she?s heard from her family come to mind. She imagines what the community was once like—the brightly painted houses nestled into the hillside, the field where boys played football, the pond where all the kids went rafting, the bountiful fishing, the huge bonfires. Coming out of her reverie, she visits the present-day park and the sundial where her great- grandmother?s name is carved in stone, and celebrates a summer day at the annual Africville Reunion/Festival.

Africville was a vibrant Black community for more than 150 years. But even though its residents paid municipal taxes, they lived without running water, sewers, paved roads and police, fire-truck and ambulance services. Over time, the city located a slaughterhouse, a hospital for infectious disease, and even the city garbage dump nearby. In the 1960s, city officials decided to demolish the community, moving people out in city dump trucks and relocating them in public housing.

Today, Africville has been replaced by a park, where former residents and their families gather each summer to remember their community. The English edition of this beautiful picture book won the Lillian Shepherd Memorial Award for Excellence in Illustration, and was a Finalist for the Governor Generals Award, Young People's Literature - Illustrated Books, and was a Finalist for the Ruth Sylvia Schwartz Chldren's Book Award.