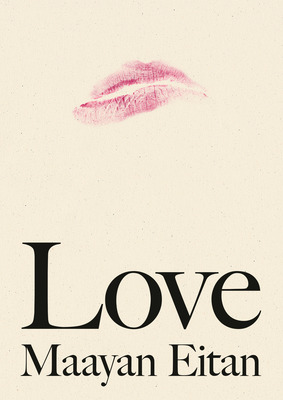 An incendiary tale of sex work from a young literary provocateur

Love is a fever dream of a novel about a young sex worker whose life blurs the boundaries between violence and intimacy, objectification and real love. Startlingly vulnerable and lyrically deft, Maayan Eitan’s debut follows Libby as she goes about her work in a nameless Israeli city, riding in cars, seeing clients, meeting and befriending other sex workers and pimps. In prose as crystalline as it is unflinching, Eitan brings us into the mind of her fierce protagonist, as Libby spins a series of fictions to tell herself, and others, in order to negotiate her life under the gaze of men. After long nights of slipping in and out of the beds of strangers, in a shocking moment of violence, she seizes control of her narrative and then labors to construct a life that resembles normalcy. But as she pursues love, it continually eludes her. She discovers that her past nights in cheap hotel rooms eerily resemble the more conventional life she’s trying to forge.

A literary sensation in Israel, Maayan Eitan’s debut set off a firestorm about the relationship between truth and fiction, and the experiences of women under the power of men. Compact and gemlike, this is a contemporary allegory of a young woman on the verge.