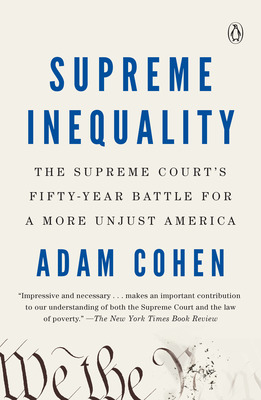 “With Supreme Inequality, Adam Cohen has built, brick by brick, an airtight case against the Supreme Court of the last half-century...Cohen’s book is a closing statement in the case against an institution tasked with protecting the vulnerable, which has emboldened the rich and powerful instead.” —Dahlia Lithwick, senior editor, Slate

A revelatory examination of the conservative direction of the Supreme Court over the last fifty years.

In Supreme Inequality, bestselling author Adam Cohen surveys the most significant Supreme Court rulings since the Nixon era and exposes how, contrary to what Americans like to believe, the Supreme Court does little to protect the rights of the poor and disadvantaged; in fact, it has not been on their side for fifty years. Cohen proves beyond doubt that the modern Court has been one of the leading forces behind the nation’s soaring level of economic inequality, and that an institution revered as a source of fairness has been systematically making America less fair.

A triumph of American legal, political, and social history, Supreme Inequality holds to account the highest court in the land and shows how much damage it has done to America’s ideals of equality, democracy, and justice for all.