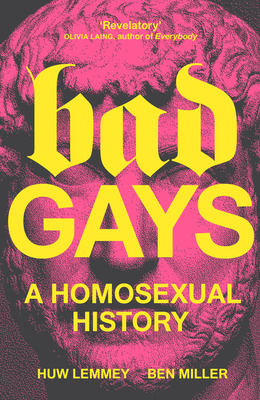 An unconventional history of homosexuality

We all remember Oscar Wilde, but who speaks for Bosie? What about those ‘bad gays’ whose unexemplary lives reveal more than we might expect? Many popular histories seek to establish homosexual heroes, pioneers, and martyrs but, as Huw Lemmey and Ben Miller argue, the past is filled with queer people whose sexualities and dastardly deeds have been overlooked despite their being informative and instructive.

Based on the hugely popular podcast series of the same name, Bad Gays asks what we can learn about LGBTQ+ history, sexuality and identity through its villains, failures, and baddies. With characters such as the Emperor Hadrian, anthropologist Margaret Mead and notorious gangster Ronnie Kray, the authors tell the story of how the figure of the white gay man was born, and how he failed. They examine a cast of kings, fascist thugs, artists and debauched bon viveurs. Imperial-era figures Lawrence of Arabia and Roger Casement get a look-in, as do FBI boss J. Edgar Hoover, lawyer Roy Cohn, and architect Philip Johnson.

Together these amazing life stories expand and challenge mainstream assumptions about sexual identity: showing that homosexuality itself was an idea that emerged in the nineteenth century, one central to major historical events.

Bad Gays is a passionate argument for rethinking gay politics beyond questions of identity, compelling readers to search for solidarity across boundaries.