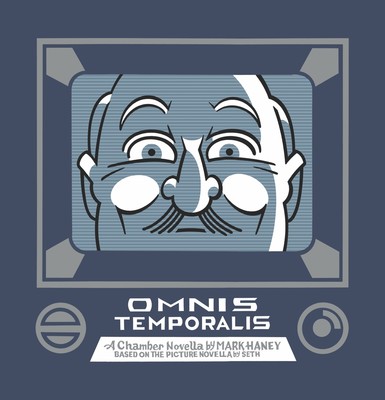 The musical adaptation of Seth’s George Sprott, captured on vinyl and packaged by the cartoonist himself!

"Something strange happens when you pass your work along to another artist for interpretation. It goes away a relative and comes back a stranger. Lines of dialogue I had written in my graphic novel, now spoken or sung by actors, were odd and moving. I could suddenly recognize from what wellspring of emotion they had originated in me. A truly moving experience.” —Seth

Omnis Temporalis remixes elements of Seth's George Sprott to bring the main character and several other residents of Dominion to life, telling a story of time, memory, loss, and the ties that bind. Featuring acclaimed TV and voice actor Richard Newman as George and soprano Dory Hayley as Daisy, the cast also includes many of Canada’s best-known stage and TV actors.

The trio of alto flute, cello, and double bass create a musical palette on which the dialogue and songs float in an ethereal, atmospheric narrative that traces parts of George's life as we accompany him through the last day of his life.