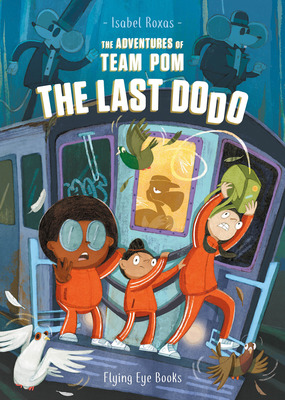 The Adventures of Team Pom: The Last Dodo

The oddball adventures of Team Pom continue with another action-packed romp through New York City—this time with even more hilarious shenanigans, sticky situations, and hungry villains in bowler hats.

“Good book alert! Drew and her daughters love biting into a good book together, and The Adventures of Team Pom is a hilarious series they revisit again and again!”
—The Drew Barrymore Show

“A little James Bond, a little Wes Anderson, and a lot of fun. Readers will love the larger-than-life characters and the offbeat jokes, brought to life in cool tones with pops of warmer hues, especially orange. Anyone seeking a creative storyline and droll humor should look no further. Quirky, inspired fun.”
— Kirkus Reviews

It’s the summer break in Shadyside, Queens, and Team Pom's investigation into the mysterious organization called C.A.O.S, and its sinister boss Steve, have hit a dead end. Seeking a bit of inspiration, Roberta, Ruby and Agnes head to the Natural History Museum to spend time with Ruby’s aunt, a de-extinction biologist in training who's just stumbled upon a precious sample of Dodo remains. But C.A.O.S. lurks in the shadows with Dodo schemes of their own! Can Team Pom foil Steve’s plans in time to save the entire city? Can peanut butter really fight evil? Or is New York City finally going to the birds?