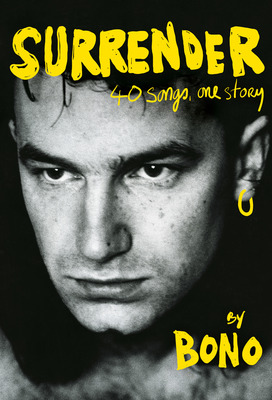 "I was born with an eccentric heart."

A remarkable book by a combative artist, who finds he's at his best when he learns how to surrender.

Episodic and irreverent, introspective and illuminating, Surrender is Bono's life story, organized—but not too tidily—around forty U2 songs.

Bono grew up on the Northside of Dublin with a Catholic father and a Protestant mother during a time of rising sectarian violence in Ireland. The loss of his mother at the age of fourteen was the absence that would shape his search for family. He started out life feeling average, but ultimately his whole life would be pitted against the assumption that anyone is average.

His creativity is chaotic but ever present . . . in the studio, onstage, at the protest, along the halls of Congress, or in a corner bar. We read about his anger issues, which colour his writing on love and nonviolence, and hear him own up to an ego "far taller than my self-esteem."

Across four decades, U2 transform from teenage wannabes to the biggest band in the world, and Bono evolves from a part-time activist to a full-time force in the fight to cancel poor countries' debt and persuade governments, particularly the United States, to respond to the global AIDS emergency. We are with him at the birth of PEPFAR, the President's Emergency Plan for AIDS Relief. At the time, it amounted to the biggest health intervention in the history of medicine to fight a single disease. He describes the campaigners of ONE, the NGO he cofounded, as "factivists" and sister organization (RED) as a "gateway drug" to activism.

U2 fans will learn why Bono believes U2 have stayed together despite decades of personal struggle and fiery creative disagreements and find keys to unlock the meaning of the band's most popular and influential songs.

The doors are opened to Bono's interior life. The squandering of human potential is a constant theme, as is his faith, which he describes as sorting the signal from the noise, a "still small voice" he hears strongest in his marriage, his music, and in the fight against extreme poverty.

Above all, Surrender is a love story written to his wife, Ali, whom he asked out on a first date the same week as the band's first rehearsal. Alison Stewart supplies direction for every major scene in this drama, including the third act they now enter, with more questions than answers regarding what to fight for and when to surrender.