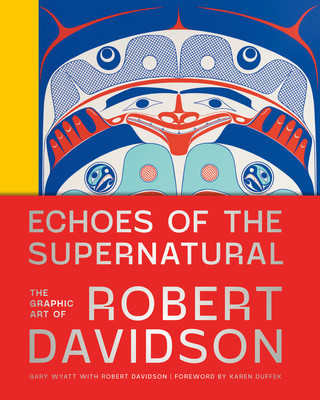 Echoes of the Supernatural

Over six decades of brilliant prints and paintings from the most prominent Northwest Coast artist of his generation.

Since leaving Haida Gwaii to study art in Vancouver - where he carved argillite with Bill Reid in a department store and hand-sold prints on the UBC campus - Guud sans glans, Robert Davidson has moved between two worlds. As a host of Potlaches, carver of masks and totem poles, and performer and teacher of traditional Haida songs and dances, he has been one of the driving forces in the resurgence of Haida culture in the aftermath of colonization. As an artist working in serigraphs, acrylic, wood, silver, and aluminum to preserve and breathe new life into Haida formline, he has become among the most respected, celebrated, and thrilling artists in the country, if not the world.

Echoes of the Supernatural is the first publication in over forty years to offer a comprehensive visual retrospective of his astonishing career. It includes new photography of over 150 prints, as well as images of over fifty paintings; numerous painted woven hats, painted and carved sculptures, jewellery, aluminum sculpture; and dozens of archival photos. His long-time gallerist Gary Wyatt, who worked closely with Davidson in shaping the book and received full access to his archives, details the artist's life and career, and offers insights on the work based on extensive new interviews. A foreword by Karen Duffek situates the contours of Davidson's practice within the broader Northwest Coast art world.