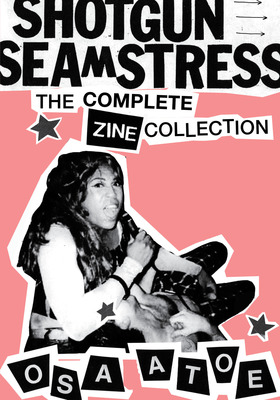 A cut & paste celebration of Black punk and outsider identity, this is the only complete collection of the fanzine Shotgun Seamstress, a legendary DIY project that centered the scope of Blackness outside of mainstream corporate consumerist identity

In 2006, Osa Atoe was inspired to create an expression out of the experience of being the only Black kid at the punk show—and Shotgun Seamstress was born.

Like a great mixtape where radical politics are never sidelined for an easier ride, Shotgun Seamstress was a fanzine by and for Black punks that expressed, represented, and documented the fullest range of being, and collectively and individually explored “all of our possibilities instead of allowing the dominant culture to tell us what it means to be Black.”

Laid out by hand, and photocopied and distributed in small batches, each issue featured essays, interviews, historical portraits of important artists and scenes, reviews, and more, all paying tribute to musicians and artists that typify free Black expression and interrupt notions of Black culture as a monolith.

Featuring figures such as Vaginal Cream Davis, the seminal Black punk band Death, Poly Styrene, Bay Area rocker Brontez Purnell, British post-punker Rachel Aggs, New York photographer Alvin Baltrop, Detroit garage rocker Mick Collins and so many others, in the pages of this book rock’n’roll is reclaimed as Black music and a wide spectrum of gender and sexuality is represented. Collecting and anthologizing the layouts as they were originally photocopied by hand, this collection comprises all eight issues created between 2006 and 2015.