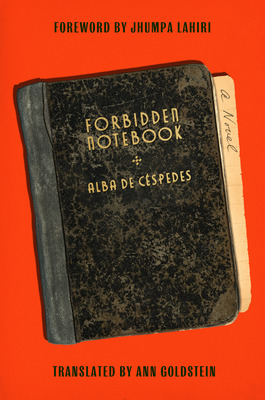 "A wrenching, sardonic depiction of a woman caught in a social trap."
—Kirkus (starred review)

"One of Italy’s most cosmopolitan, incendiary, insightful, and overlooked writers."
—Jhumpa Lahiri

With a foreword by Jhumpa Lahiri, Quaderno Proibito is a classic domestic novel by the Italian-Cuban feminist writer Alba de Céspedes, whose work inspired contemporary writers like Elena Ferrante.

Valeria Cossati never suspected how unhappy she had become with the shabby gentility of her bourgeois life—until she begins to jot down her thoughts and feelings in a little black book she keeps hidden in a closet. This new secret activity leads her to scrutinize herself and her life more closely, and she soon realizes that her individuality is being stifled by her devotion and sense of duty toward her husband, daughter, and son. As the conflicts between parents and children, husband and wife, and friends and lovers intensify, what goes on behind the Cossatis’ facade of middle-class respectability gradually comes to light, tearing the family’s fragile fabric apart.