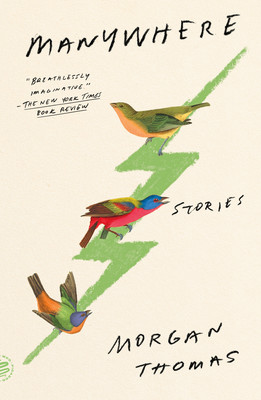 “These breathlessly imaginative stories are all the more remarkable for the elegant, organic ways in which the author unhooks language from its entrenched assumptions about men and women.” —The New York Times Book Review

Named a most anticipated book of 2022 by Nylon, Autostraddle, Electric Literature, Lambda Literary Review, The Millions, and Literary Hub.

The nine stories in Morgan Thomas’s shimmering debut collection witness Southern queer and genderqueer characters determined to find themselves reflected in the annals of history, whatever the cost. As Thomas’s subjects trace deceit and violence through Southern tall tales and their own pasts, their journeys reveal the porous boundaries of body, land, and history, and the sometimes ruthless awakenings of self-discovery.

A trans woman finds her independence with the purchase of a pregnancy bump; a young Virginian flees their relationship, choosing instead to immerse themself in the life of an intersex person from Colonial-era Jamestown. A writer tries to evade the murky and violent legacy of an ancestor who supposedly disappeared into a midwifery bag, and in the uncanny title story, a young trans person brings home a replacement daughter for their elderly father.

Winding between reinvention and remembrance, transition and transcendence, these origin stories resound across centuries. With warm, meticulous emotional intelligence, Morgan Thomas uncovers how the stories we borrow to understand ourselves in turn shape the people we become. Ushering in a new form of queer mythmaking, Manywhere introduces a storyteller of uncommon range and talent.