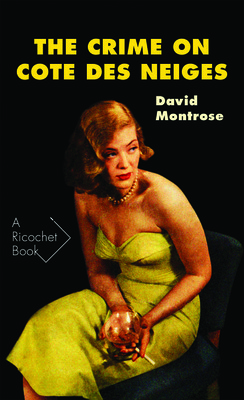 Crime on Cote des Neiges, The

Véhicule Press launches its Ricochet Series of vintage mysteries with The Crime on Cotes des Neiges—a hardboiled detective novel set in Montreal originally published in 1951. At the centre of this novel, and two others by David Montrose, is the hard-drinking, hard-working private dick, Russell Teed.

There were two blondes and a brunette. One of them had killed John Sark. Detective Sergeant Framboise thought it was Inez Sark. Inez had left her parents’ thirty-five room shack in Westmount to marry John Sark, the biggest bootlegger Montreal had ever known. That, said Framboise, was in itself motive enough. But Russell Teed knew that there was an earlier Mrs. Sark who had an even better motive. East Side, west side, all over town Russ chased clues, trying to keep the gorgeous Inez out of jail. If he had to shoot up a couple of characters and bust up a drug ring in his search to lay bare Sark’s lovelife, well, that was all part of the service of Russell Teed Investigations.